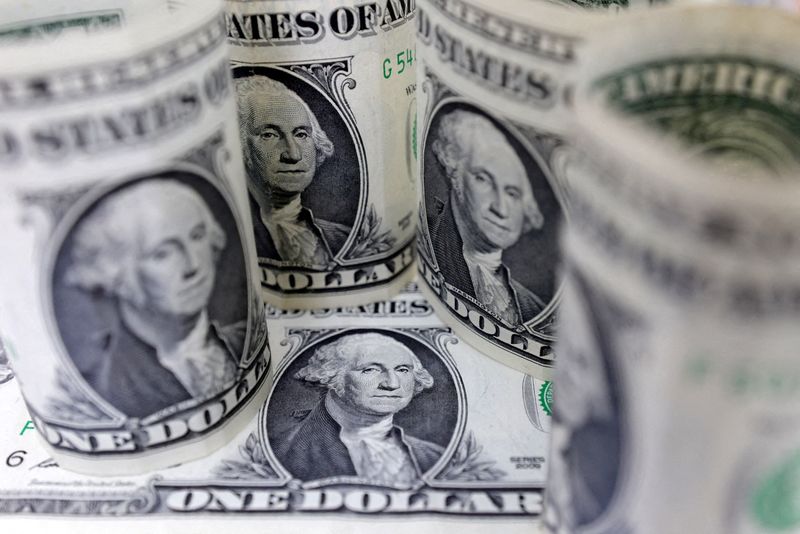 NEW YORK (Reuters) - The dollar clawed back earlier losses on Monday as a hawkish Federal Reserve official laid out the case for further rate hikes, while the Australian dollar sank on concerns about unrest over COVID-19 restrictions in China.

The greenback rebounded in early U.S. trading and added to gains after St. Louis Fed President James Bullard said the U.S. central bank needs to raise interest rates quite a bit further and then hold them there throughout next year and into 2024 to gain control of inflation and bring it back toward the Fed's 2% goal.

Comments from Fed Chair Jerome Powell on Wednesday will be watched for any new signals on further tightening with key U.S. jobs data for November also due on Friday. The U.S. central bank is expected to hike rates by an additional 50 basis points when it meets on Dec. 13-14.

“The markets have hit a bit of a plateau about what they’re expecting. They know that the Fed’s going to raise rates, and that’s behind everything, but they’re not sure how much or when,” said Joseph Trevisani, senior analyst at FXStreet.com.

The dollar index has fallen to 106.65 from a 20-year high of 114.78 on Sept. 28 on expectations that its rally may have been over stretched and as the Fed looks to slow its pace of rate increases.

Some of the recent decline is also likely due to investors and traders booking profits before year-end, said Trevisani, noting many trading firms curtail activity in December.

The greenback was also likely supported after the dollar index reached the 200-day moving average at 105.369.

The index also posted an outside day, reaching both a higher high and a lower low than the previous session, which could bode well for further gains, Tom Fitzpatrick, chief technical strategist at Citigroup (NYSE:C), said in a note.

It is the first bullish outside day on the dollar index since the high reached on Sept. 28 and is the first time it has tested the 200-day moving average since June 2021, he said.

The dollar had dipped earlier on Monday despite other safe-haven currencies the Japanese yen and the Swiss franc gaining on concerns about China.

Hundreds of demonstrators and police clashed in Shanghai on Sunday night as protests over China's stringent COVID restrictions flared for a third day and spread to several cities in the wake of a deadly fire in the country's far west.

The risk sensitive Aussie dollar, which is strongly tied to Chinese growth, was the worst performing major currency, falling 1.61% to $0.6649. The currency was also dented by data showing Australian retail sales suffered their first fall of 2022 in October as rising prices and higher interest rates finally seemed to have an impact on spending.

The offshore yuan weakened against the dollar to 7.2468.

Bitcoin fell after major cryptocurrency lender BlockFi filed for Chapter 11 bankruptcy protection along with eight affiliates, the latest crypto casualty to follow the spectacular collapse of the FTX exchange earlier this month.