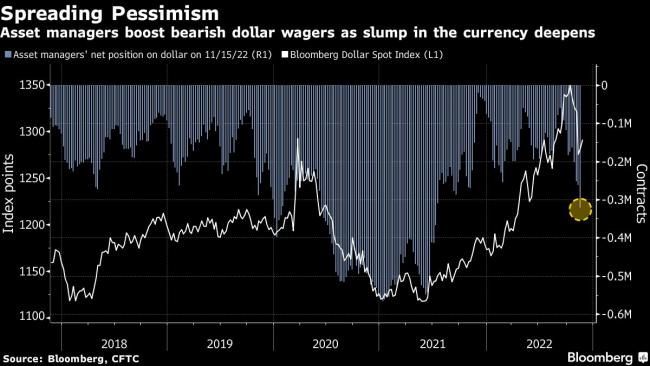 (Bloomberg) -- The dollar looked unstoppable earlier this year when investors were adding to bets on inflation and US rate hikes. Now they’re turning against it in droves.

Former bulls including JPMorgan (NYSE:JPM) Asset Management and Morgan Stanley (NYSE:MS) say the era of dollar strength is ending as cooling prices spur markets to trim bets on further Federal Reserve tightening. That may spell buying opportunities for the currencies of Europe, Japan and emerging markets.

“Markets now have a better grasp of the Fed’s trajectory,” said Kerry Craig, a strategist in Melbourne at JPMorgan Asset, which oversees $2.5 trillion. “The dollar is no longer the straight, one-way buy we’ve seen this year. There’s room for currencies like the euro and yen to recover.”

Debate is intensifying on how best to trade the world’s reserve currency as more dovish commentary from Fed officials and slowing inflation fuel bets of a slower pace of rate hikes. Most have arrived to a similar conclusion: US exceptionalism is waning.

A longer-term downturn in the dollar has broader implications than just currency markets too. It will ease stress on European economies caused by imported inflation, dampen the price of food purchases for the poorest nations, and reduce the debt repayment burdens for governments who borrow in the US currency.

The Bloomberg Dollar Spot Index, which tracks the US currency against 10 of its major peers, has dropped more than 6% from its September high. At the same time, the greenback has weakened against all of its Group-of-10 peers over the past month, sliding about 7% against the yen and New Zealand dollar.

“US inflation is showing signs of moderating and the central bank is conscious of the lagged effect rate hikes would have on price growth,” said James Athey, investment director of rates management for UK-based abrdn in London. At the same time, “we think that divergence has reached its limit,” he said, referring to the difference between monetary policy in the US and Japan.

The fund switched to a dollar neutral position about a month ago from an overweight one, and anticipates the greenback will weaken against the yen and pound.

He’s not the only one. Positioning data show asset managers boosted bets on a weaker US currency by the most since July 2021 during the week to Nov. 18, according to the latest Commodity Futures Trading Commission data.

The latest Fed minutes back their view. Most officials agreed it would soon be appropriate to slow the pace of rate increases. Expectations for the peak in Fed rates has dropped to below 5%, from above that in early November, according to overnight index swaps.

Treasury yields are also showing signs of having peaked, with those on 10-year notes having slipped around 70 basis points from their October high.

Not everyone is writing off the dollar just yet.

The Fed remains laser-focused on ensuring inflation is under control, and that means interest rates may have to stay elevated for a while before it starts cutting, supporting dollar assets, according to Agnes Belaisch, a strategist at Barings in London.

“The Fed’s job is not done,” said Belaisch, whose firm oversees $338 billion. “A long dollar position continues to make sense.”

Others are adjusting their positions in anticipation of a weaker greenback.

It’s a good time to buy currencies that have “been under extreme pressure,” including the yen and the South Korean won, said Sonal Desai, chief investment officer for fixed income at San Mateo, California-based Franklin Templeton.

Morgan Stanley analysts led by Andrew Sheets predicts the dollar will peak this quarter, and then decline through 2023, supporting emerging-market assets. HSBC Holdings Plc (LON:HSBA) strategist Paul Mackel said the US currency is likely to “flop” next year.